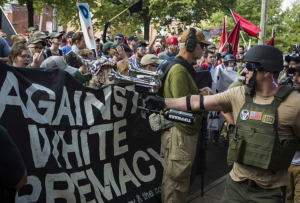 When did the world get so angry? How did it happen so quickly? As we look ahead to a new year in 2018, we have some serious issues to deal with in the world of relationships － especially relationships in regard to race, religion, and politics. How did we get so full of frustration that the slightest disagreement or difference of opinion overflows to unkind words, unloving hate, and even outright violence?

Read the comment sections on any public news site or dare to scroll down the comments of someone’s controversial FaceBook post or Twitter feed­ and you’ll probably be sorry you did. It’s become painfully clear that racial, religious, and political conflicts are part of a long-simmering, decades-in-the-making anger. In a world that promotes strict tolerance, people seem to be anything but that.

We’re tired of what’s going on in our world and many, including followers of Jesus, are angry about it. What is a believer in Jesus to think in times like these? To feel when life is out of control? To do when we’re angry?

In the Old Testament of the Bible, the prophet Micah, on behalf of his people, asked the LORD a similar question (Micah 6:6-7). In times of social and political turmoil, Micah prophesied about the coming destruction of the Northern Kingdom (Israel) by the Assyrians and the later defeat of the Southern Kingdom (Judah) by the Babylonians. Micah then told the people of God how He wanted them to act, love, and live:

“Mankind, He has told each of you what is good and what it is the LORD requires of you: to act justly, to love faithfulness, and to walk humbly with your God.” Micah 6:8 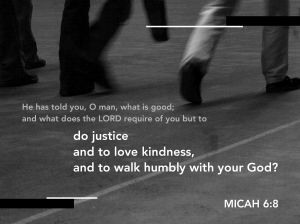 This verse contains one of the most succinct and powerful expressions of the LORD’s essential requirements for godly living in a mad world. At first glance, we bristle at the thought of requirements. As people, we don’t like to be told what to do.

Micah explains the essence of spiritual reality that is not just a set of rules; he encourages much more than mere ritual worship. God wants us to obey Him because we want to (for our good), not because we have to.

In Micah 6:8, the Lord wanted each of His people (“Mankind”) to live with Him. There is a progression in these requirements from what is external to what is internal and from human relationships to our relationship with God Himself.  The verse explains, “He has told each of you.” He had already told the Israelites what would be good (beneficial) for them:

“And now, Israel, what does the Lord your God ask of you except to fear the Lord your God by walking in all His ways, to love Him, and to worship the Lord your God with all your heart and all your soul… He executes justice for the fatherless and the widow, and loves the foreigner, giving him food and clothing.” (Deuteronomy 10:12,18)

“Above all, fear the LORD and worship Him faithfully with all your heart; consider the great things He has done for you.” (1 Samuel 12:24)

It’s related to Jesus’ “Great Commandment” in the New Testament: “‘Love the Lord your God with all your heart, with all your soul, and with all your mind.’ This is the greatest and most important command. The second is like it: ‘Love your neighbor as yourself.’ All the Law and the Prophets depend on these two commands.” (Matthew 22:38-40):

A right relationship with God that results in great relationships with others requires three things: to act justly, love faithfully, and walk humbly with God.

1. God wants us to act the right way:  seek godly justice for the fair treatment of others.

Specifically, the Lord wanted them to practice justice rather than continuing to plot and practice unfairness and injustice toward one another (cf. v. 11; 2:1–2; 3:1–3). I realize that in our contemporary society, “social justice” has become a convoluted term meaning different things to different people. So let’s use the term “godly justice” that provides a biblical frame of reference that guides how we act.

The active infinitive (act justly) indicates something “to do” － to carry out or perform an action or course of action. In order for there to be justice, judgement is required in the determination of rights and the assignment of rewards or punishments. In the OT, this Hebrew word for justice (מִשְׁפָּט mišpāṭ) describes it as a rightness which is rooted in God’s character, compassion, and action. In contrast to the anger of injustice in our day (both personal and systemic), the Psalmist said, “How happy are those who uphold justice, who practice righteousness at all times” (Psalm 106:3). In other words, JUSTICE leads to JOY!

The Bible explains that wise people think of justice (Proverbs 12:5), speak of it (Psalm 37:30), seek it (Isaiah 1:17), provide it (James 1:27), and enjoy it (Proverbs 21:15), because God requires it along with a heart of love and a spirit of humility (Micah 6:8). Justice, however, isn’t self-righteous or prideful. Justice is humbly trusting and depending on Him rather than arrogantly defending or depending on our “rightness.”

Justice shows no favoritism nor is persuaded by politics, power, position, or economics. Justice requires empathy as we consider how we would feel in another’s shoes, It doesn’t give preference to the either the poor or to the wealthy (Deuteronomy 1:17). Justice doesn’t favor the citizen or to the resident alien (Leviticus 24:22). Social justice is godly justice.

2. God wants us to love the right way:  be personally committed to meeting the needs of others.

He also wanted His covenant people to love faithfully and practice loyal love (Hebrew חֶסֶד ḥesed) by carrying through their commitments to help one another, as He had with them. This Hebrew word is used 240 times in the OT to describe God’s grace, mercy, goodness, and devotion in His loving-kindness. His love is unconditional, unending, constant, eternal. God’s love is not just sentimental or emotional. It’s based upon His actions, specifically His strength to fulfill His promises to His people (Micah 7:20).

As followers of Jesus, we are to love our enemies – whoever and wherever they may be – just as He has loved us. Christ-like love gives others what they need the most when (based on attitudes, words, or behavior) they deserve it the least, at the greatest personal cost just as He loves us (Romans 12; 2 Corinthians 5:14; 1 John 4:10).

3. God wants us to live the right way:  walk humbly before God in our relationships with others.

He wanted His people to live their lives humbly trusting and depending on Him rather than arrogantly relying on themselves (cf. Micah 2:3). Pride is the enemy of justice and love. Whereas pride divides people; humility cultivates unity. Worldly Pride says, “Look what I’ve done.” Godly humility says, “Look what God’s done.”

In this mad, angry world today, the truth is that sin infects us all, and so we cannot simply divide the world into the heroes and the villains. Only by God’s Spirit will we see justice and experience it, but that doesn’t mean we don’t have a responsibility to do what’s right before God, love others as He has loved us, and remember how His justice was satisfied by Christ’s sacrifice on the cross in our place – my place – for our sin – my sin.

Every New Year’s Day, many people plan their day around watching a couple of fights between grown men. This New Year’s Day is no different. Today at 4:00pm, guys from Oklahoma will travel to the Rose Bowl in California, looking for a fight with some Bulldogs from Georgia. Later tonight, there will be another fight between some guys from Alabama taking on another group from South Carolina in New Orleans. Two football games will take place between two rivals who are enemies on the field with fans representing both in the stands.

But there will also be another group of people on the field. The referees. Their job is to be impartial. Their job is to ensure a fair game. They must be humble to make sure pride doesn’t cloud their vision. Their job is to establish the rules from a rule book given by a higher authority － the NCAA. At times, the referees/officials get yelled at from both teams on the field, both coaches, and from most fans in the stands, but they are to be just in their decisions. If the referee begins to choose sides, it results in chaos. If the referee is influenced by the fans in the stands, there is confusion on the field. But when the group of referees impartially and fairly applies the rules of the game established by NCAA, the game can be played and enjoyed on the field as intended.

In the same way, followers of Jesus are God’s referees here on the Earth as His representatives from Heaven. The LORD has told each of us what is good and what it is He requires of us: to act justly, to love faithfulness, and to walk humbly with our God.