Who am I? I work at a church as a pastor, but that’s not who I am. I am a husband and a father, but who I am is not defined by my family roles and responsibilities. I’m a huge Texas Ranger’s fan, but my identity is not wrapped up with their success or their slumps. So who am I? Good question.

Who I am is not a function of what I do. Nor is my worth determined by how I measure up in my performance as a pastor, husband, father, or fan. Who I am is not based on anything I do or how well (or poorly) I do it.

So who are you?

Who are you? The problem with determining your personal identity, worth, or value from any of these is that all of them are temporary and will eventually become meaningless and will ultimately leave you feeling worthless. 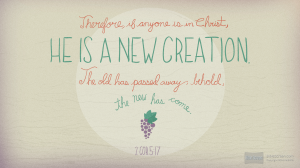 Your true worth and your greatest value in life has everything to do with who you are in Christ Jesus. Listen to what Paul says, “If anyone is in Christ, he is a new creation; old things have passed away, and look, new things have come.” 2 Corinthians 5:17  “In Christ” is a phrase Paul used repeatedly to talk about a believer’s spiritual, eternal, unchanging, and unconditional relationship to Christ.

If you have trusted Jesus, the Son of God, as the One who died in your place and rose from the dead to give you new life – you are a new creation. In Christ, you have really become a new person. Your identity – who you really are – is based on your relationship with Jesus and what He has done rather than what you do, how you do it, where you came from, what you have, and who you know. Who are you? A new creation, a new person who is free to be YOU.

In Christ, you have incredible worth! The old way of living by having to doing good works, trying be good, having to perform, measure up, fit in, or win approval is O-V-E-R. The new way, the best way of living is “in Christ” because in Him you are completely loved, totally accepted, and forever valued.

Barry Zito, once known as one of the most dominating pitchers in Major League baseball, explained how God had used his injury to figure out who he really was in Christ. In 2002, playing for the Oakland A’s, he won 23 games and won the Cy Young Award as the league’s best pitcher. But in 2010 he was cut from the San Francisco Giants starting roster. The next season he was plagued by injuries and poor performances. His worth as a person was so wrapped up in who he was as a pitcher that how he felt about himself was either good or bad based on how he performed. Zito said. “Sometimes you have to go through difficulty and trials to really get broken down. I realized I’d been doing it alone.”

By the end of 2012, Zito had returned to his peak performance, winning his last 14 starts and leading the Giants to a World Series title over the Detroit Tigers. Before the playoffs began, Zito got a tattoo of a golden calf on the inside of his right bicep. He said, “It signifies the idolatry and value that I was putting on earthly things and human recognition.” More than being a great MLB pitcher earning millions of dollars, Zito’s greatest value is who he is in Christ.

Who are you? What is it that makes you important? Is it what you do? How you perform? Where you came from? How much money you make? Who you hang around?  In Christ, you are priceless!

One thought on “Who are you?”