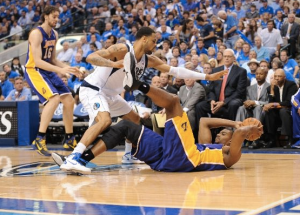 Goliath has fallen. David has ascended.

Yesterday marked the end of an era for the mighty Los Angeles Lakers as they fell to the lowly, “soft” Dallas Mavericks. At the start of the playoffs, no one gave the Mavericks a fighting chance against their first round opponent (the Portland Trailblazers) much less the reigning NBA champions from the last two years who were aiming for a three-peat. Legendary Hall of Fame Coach Phil Jackson returned to the Lakers this season in pursuit of his Twelfth NBA title over a 20-year career. Multiple MVP star Kobe Bryant was shooting for his 6th championship with LA. In the end, the Lakers were out-manned and out-gunned by the Mavericks. Not only were they defeated, but swept in the first four games of a seven game series. By half-time of the elimination game, the Mavericks were ahead by 24 points. The champions were hanging their heads while the little guys were making history.

The assault came from the bench and the shots from the air as Jason Terry and Peja Stojakovic hit a combined 15 out of 16 3-point baskets. Terry had an NBA playoff record-tying nine 3-pointers. As a team, the Mavs also tied a record with 20 made 3-point baskets. The game and the series were both over by the second quarter.

The Los Angeles Lakers’ frustration boiled over in a final two-prong meltdown with flagrant foul 2 calls dished out and with two player ejections in a 45-second span of the fourth quarter. As my friend, Doug Bankes, commented during the 4th Quarter, “the Lakers are leaving Dallas…one at a time.” First it was Lamar Odom who set an illegal, blindsided pick against the Mavericks’ Dirk Nowitzki. Then, three possessions later, 7-foot center Andrew

Bynum delivered an intentional mid-air body slam to under 6-foot guard J.J. Barea, who repeatedly dogged the Lakers’ defense with drives to the hoop. After the game Bynum said, “For me, it was embarrassing to have the smallest guy on the court keep running down the lane and making shots.” Barea was also the victim of a flagrant foul in the waning seconds of Game 2 when Ron Artest reached out and grabbed Barea’s face, earning Artest a one-game suspension for Game 3. Mavs starting shooting guard DeShawn Stevenson said after the series, “When people get frustrated they show their real character.” On Sunday, Goliath showed his character. 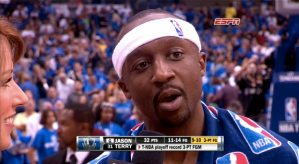 During his post-game interview, Jason Terry commented on Goliath’s demise, “To God be the glory – we stayed focused. We came out and we executed our game plan.” It was the little guys, the ordinary guys who showed up, played hard, and stayed tough who eventually won the day – and the series.

Most of us like to cheer for the underdog. We want Goliath to fall and David to stand victorious. We are fans of the little guys like JJ Barea who seem so ordinary. We cheer all the more when they do something extra-ordinary.  Maybe it’s because we feel so ordinary. We want to stand up and stand out because daily life seems so mundane, so…daily.

Throughout the Scriptures, we find that God routinely uses unlikely people and uncommon means to accomplish His eternal purposes and everlasting promises. He uses hard working, faithful men and women with ordinary talents to accomplish extraordinary things.

Most everyone is familiar with David verses Goliath from 1 Samuel 17. Goliath stands as the tall champion and defiant enemy of the living God and His people. David, just a youth at the time, stood up to ask why no one has stood up to the giant. He was criticized by his older, bigger brothers, but answered their rebuke and King Saul’s by trusting in the Lord and the ordinary life experiences as a common shepherd boy that prepared him to fight an extra-ordinary battle.

Similarly, in Judges 4:15-24, God used the most unlikely woman (Jael) and her common skills (setting up a tent) to accomplish His greater plan (of defeating the General, Sisera) to bring peace to His people.  Simply by doing the daily things of serving milk and setting up tents, Jael was prepared to stand up and stand out when the time came for her to be used by God for His purposes.

Whatever your daily routine and no matter how mundane it may seem – whether it’s washing dishes, doing the laundry, filling orders, teaching children, writing software – realize that God works through the ordinary to accomplish the extraordinary. By serving faithfully each day, you’ll be ready to stand up and stand out when the Lord provides an opportunity.

God uses the little people for big things so that all the world will recognize that it’s the Lord who saves (1 Sam. 17:46-47). When leaders lead, servants serve, and workers work – praise the Lord (Judges 5:1-2). And as Jason Terry said, “To God be the glory!”

One thought on “Stand up and Stand out”